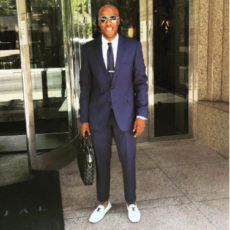 As each season passes, I’m more willing to adjusting my style with crisp looks that I takeaway from other people’s wardrobe. This fall and winter, that train of thought will extend to my suit collection.

Devin Booker and Dwayne Wade are two people who caught my attention with their loafer, no sock look and a pant that stops right at the ankle. Now, I will admit that I’ve left multiple pair of my slacks still in my closet with my traditional cuff at the top of the loafer look. That said, I took some of my suits with a little more color as well as some linen pants and had them custom tailored to create that newer vibe. I’ve seen the look with and without the cuff at the bottom so I chose to stay with the cuff.

I’ve found that a Perry Ellis Slim Fit suit off the rack is a great and inexpensive way to start the look. It’s perfect once I get it tailored after the fact. Then it’s about finding the right accessories and loafers. I’ll leave that up to you.

Here’s a look at both my look as well as a look at Booker’s and Wade’s: