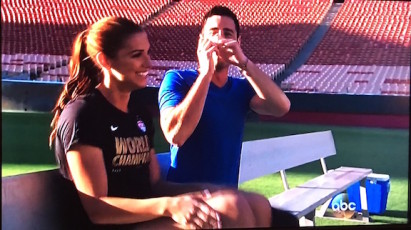 Three episodes in and the third villain emerges. First it was Lace, then Olivia, and the now poor misunderstood Jubilee. The Bachelor producers are geniuses.

First Date: Lauren B., a flight attendant, was nervous for the first date because there was a plane involved. However, I’m sure she wasn’t mad about the fact that the plane through over all of the other peasants (contestants) while she was kissing Ben in the plane. Lauren takes a majority of the date to tell Ben she likes “simple things” so basically she wanted him to know she isn’t high maintenance. Oddly enough he seems to be into high maintenance (cough, cough Olivia) so maybe try another angle Lauren B. The couple dance to Lucy Angel (yeah, I don’t know who she is either) at the end of the night, and Ben talks about her music like it’s an Adele love song (it’s not).

Caila: She loses it when she starts thinking about Lauren B and Ben on their one on one date. Honestly Caila, I’d be nervous too.

Jubilee: As two dates cards pass by without her name on them, her facial expressions get increasingly entertaining. However, she receives a one on one date later in the episode. Jubliee starts off her date being mad Ben was 20 minutes late, and mad that she has to go in a helicopter. She follows that up spitting out caviar in front of Ben, which was about as classy as her all white linen outfit, topped off with giant hoop earrings. Jubilee really opens up about her tough past and Ben definitely respects her unlike the girls who have trouble controlling their jealousy.

Group date: Ben brings out Alex Morgan to teach these girls how to play soccer, and if I were the girls I would be mad because how is anyone supposed to look hotter than Alex Morgan playing soccer?! The girls took this as seriously as the World Cup, and they have never watched the World Cup. 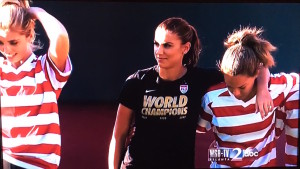 If I were the girls I would be mad Alex Morgan showed up bc how are they supposed 2 look hotter than Alex Morgan playing soccer?#thebachelor

Amanda: She just continues to be adorable so I can’t even begin to make a sarcastic comment about her.

Haley: Haley suffered from separation anxiety when Emily and her had to play against each other on opposing soccer teams. She never said anything about it but I had never seen them a part until then.

Jennifer: She isn’t that memorable on any dates but she sure does try to make herself memorable in her low cut cocktail party dresses.

Leah: Leah tells us how much she loves football again (it’s a soccer date so she’s confused from the get go) and we are all like Leah we know you love football because the image of you bending over, exposing your spanx, with a football is stuck in our brains.

Amber: Amber is trying so hard to find something wrong with Olivia and all she can come up with is that she has weird toes. I hope the only bad thing my enemies say about me is that I have ugly toes. Plot twist Amber got the group rose.

Lauren H: Lauren H. THE TEACHER made short air time with her “I’m not very good a juggling a lot of (soccer) balls.” quote because how could she top that one liner?

Olivia: Of course Olivia’s team won the soccer team won the game, because has she lost anything yet? Apparently Olivia told everyone that her wardrobe is worth $40k, and honestly it was well spent so I’m not even judging her for that gold digger comment. She didn’t have a lack of foot in (giant) mouth comments when she tearfully told Ben she hates her cankles after he just said two family members died.

I hope that the only insult my enemies can up with about me is that I have "bad toes." Olivia is winning at life. #TheBachelor

Rachel: Rachel managed to get hurt on the soccer field but is capable of riding a hover board flawlessly?

Lace: Lace must have been on a water break telling Alex Morgan how she isn’t crazy when they went over the rules of soccer. “I didn’t know the goalie could use their hands” – Lace.

Emily: She was the all-star goalie of the game (sorry Lace).

Lace gracefully exits voluntarily in the ultimate Bachelor plot twist. Shushanna was eliminated by Ben mainly because I think he gave up trying to pronounce her name correctly a long time ago. Poor Jami joined the two girls in the limo ride home where I think she googled cat adoption places the entire ride home.