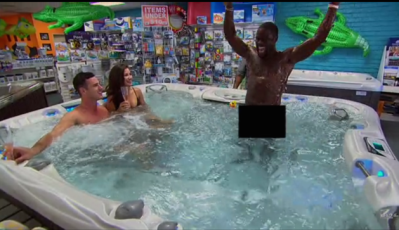 It is just two weeks and I think that Ben is already my favorite Bachelor of the 20 seasons! And I’m not just saying that because the first shot of Ben of this episode with him wearing close to nothing. He managed to make every girl feel special during some point in the week, and it is kind of adorable how he holds every girl’s hand when he talks to them.

Date 1: Ben takes the girls to a high school where they have to participate in challenges in groups of two to win “Homecoming Queen” along with time with Ben. However the activities included dunking your head in water to bob for apples and running a race around the track, so the winner got to spend sweaty, make up free one on one time with Ben, lucky them!

Jackie: Jackie only got air time during the group date when the other girls were making fun of her small mouth in front of Ben, so that was unfortunate.

LB: LB flew under the radar again this episode. Turns out the reason why is because she really didn’t want to be there in the first place and went home after denying his rose during the ceremony.

Lauren H.: Lauren H got a ribbon for the best volcano explosion at the science fair from Ben. So basically their relationship is as boring as that ribbon sounds.

Amber: Amber came in second place on the group date and got LB’s left over rose when she turned Ben’s rose down during the rose ceremony. Rough week for Amber.

Mandi: Mandi beat all of the girls in the competitions to win the time with Ben. However, I think Ben modified her prize because he didn’t want to spend one second longer with Mandi and her sweaty crop top.

JoJo: My personal favorite part of this date was when JoJo and Becca let the world know that neither one of them knew where or what the state of Indiana is. Despite her geography mishap was forgiven by Ben and he specifically pulled her aside during the group date to talk on the rooftop. JoJo ended up getting the group date rose, which obviously didn’t sit well with the other girls (tears already).

Jubilee: Unfortunately for Jubilee she chose Lace as her partner in the group date challenge and assigned Lace as the “brains” of the pair. Her place in the competition ended quickly after discovering Lace can’t read. Jubilee opened up to Ben about being adopted, however throwing out the adoption card apparently doesn’t get you a group date rose.

Jennifer: Jennifer was Ben’s first kiss of the night and she didn’t waste any time letting the other girls know.

Lace: Lace continues to act like she lost her mind a long time ago. However, she thinks the remedy for that is to continuously tell Ben how she’s not crazy. Word to the wise Lace, if you have to continuously tell someone you aren’t crazy, it absolutely means you’re crazy. Shockingly, Lace stays another night but I’m very confident in Bachelor producers having a say in that because she is honestly great TV.

Date 2: Ben chose Caila to go on a one on one date along with Ice Cube and Kevin Hart. The pair took Caila and Ben on a “cheap date” to the liquor store and a hot tub store to test out the hot tub. However, the night ended with a private concert from Amos Lee in true Bachelor fashion.

Caila could barely get a word in during her date with Ice Cube and Kevin Hart riding along. However, Ben gave her a rose during their date so there was definitely chemistry. Her date night outfit was super cute and classy in a black sequined jacket.

Date 3: The second group date was in a “Love Lab” where all of the girls were scored on how compatible the girls are with Ben on a scale of 1 to 10.

Emily & Haley: The twins (who I still can’t tell apart) started off the date by telling us they didn’t know anything about science because they weren’t very smart, so thanks for saying what America was thinking twins.

Shushanna: The majority of what I understood from Shushanna from this date was that she was very worried that Ben would think that she smells like cabbage during the smell test. I also understood that she thought wearing purple eye lashes was a good idea. We will just have to agree to disagree on that one Shushanna.

Sam: Poor Sam had a rough group date. Ben described her as smelling “sour” compared to the “sweet” and “flowery” responses the other girls got. Then Sam got the lowest score of 2.42/10, so basically her day couldn’t be going any worse.

Olivia: Olivia begins to emerge as the villain and it’s only the second episode. She received the first impression rose on episode one and now she wins the love lab challenge by having the highest compatibility score. She looked adorable in her hot pink dress, however the horrible “wide open mouth” face emerged from Olivia and she continued to do it throughout the episode (not her best look). Despite her horrible faces and cocky comments, of course Olivia won the group rose date. 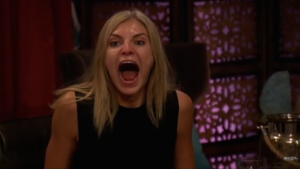 Amanda: Amanda tells Ben that she has two young daughters; so later in the night he set up the most adorable barrette making activity for the two of them to do together for her daughters.

Leah: Leah didn’t get to go on a date this week, but I don’t blame Ben after her terrible football hiking first impression the night before.

Lauren B: Lauren B rocked a yellow lace mini dress to the rose ceremony. Although her and Ben didn’t have a date this week, he made her a picture of their first meeting so she is absolutely going to go far this season.

Jami & Rachel: The two girls were only shown receiving roses tonight because they also didn’t have any dates with Ben this week. However, the good news is that Rachel seems to have ditched the hover board.

Along with LB going home, the attorney Sam and her sour smell went home. Mandi proved that even homecoming queens could get dumped because she joined LB and Sam in the limo ride home. Jackie was the last girl to join them in the limo ride home so she should probably cancel her save the date cards for her and Ben’s wedding.