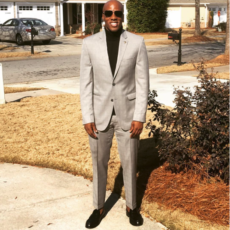 I wrote about suits in the fall as a staple of my closet. The wrinkle this season is the mock turtleneck underneath as opposed to a traditional button up shirt. I’ve never been a huge fan of the turtleneck in my personal ensemble but I saw Future pull it off earlier in the season. The response to the “less is more” approach was well received so look forward it again from me.