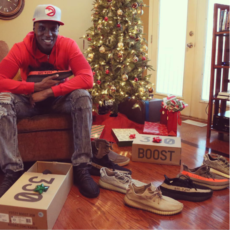 Kanye West has had his fair share of ups and downs both personally and professionally over the past 18 months. A definite high point has been the continued success of his adidas Yeezy shoe collection.

I’ve copped the majority of the Boost 350 releases. I told my homegirl, Kianna Holland, in a conversation this weekend that I was late on the first set of 750’s and have been upset ever since. She immediately went searching and copped authentic versions of the hard to find Turtle Dove and Black 350’s that dropped in the First Version.

Even with the high volume of fake Yeezy’s available in the marketplace, the shoe has held value well since this time last year. In that way, it’s paralleled only by the rare vintage Jordan releases (i.e. Concord 11’s) in recent memory.

When you reach the top, they'll talk about you as if you aren't one of the hardest workers in the game. Like you were a privileged kid and the success was handed to you with a bow on top. They'll act as if you didn't have to put in the hard work to become elite. Little do they know, they'll be dead wrong. {shot by @larrywrhinehart & @palmtreejd}