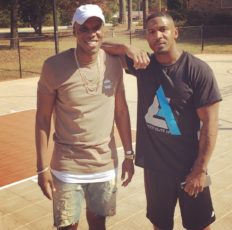 Stevie Jordan is an accomplished music producer who worked extensively for Diddy’s Bad Boy Records label amongst others. These days, he’s better known as Stevie J. from VH1’s hit series “Love and Hip Hop.” His success on that series led to the upcoming spinoff show, “The Stevie J. Project.”

Last week, the series show part of an episode at PSBPopCulture.com headquarters. I had the chance to connect with him and Mr. Dalvin from the legendary RnB group, Jodeci. Here’s a look at the day:

VH1's Stevie J came to hoop at the house this week. Asked him for some knowledge. His reply, "ain't no love in hip hop." [shot by @shun.williams] #LoveAndHipHop 👕: #asos #ruthless 🎩: #mnml