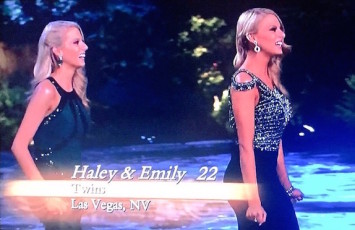 Taylor Johnson will bring us weekly updates from the hit TV series “The Bachelor.” She’ll breakdown fashion from the show and rank the remaining contestants on a weekly.

Ben Higgins, the 26-year-old star of the season, was quite the gentleman Monday night for his premier as the new bachelor for ABC. He greeted 28 women to the bachelor mansion, but I think there were a few women he wished he denied at the front door. This season is not short of any of the usual crazy personalities that The Bachelor producers never fail to entertain us with.

Here is a ranking of No. 9 to No. 16 remaining ladies from my favorite to least favorite:

9) Sam, 26: A recent graduate of law school, Sam rocked a red lace dress out of the limo. I am also obsessed with the two-piece outfit she wore in her intro package. Honestly, I’m just excited for her to stay around to see what outfit she is going to wear next.

10) Joelle “JoJo,” 24: We were introduced to her in a unicorn mask, but surprisingly she isn’t the token weirdo of the season. She tamed down the crazy when she talked to Ben inside the house, so if she keeps the unicorn mask in her suitcase she might move up in the rankings.

11) Tiara, 27: With an occupation like “chicken enthusiast” you are just asking to be labeled as the crazy one of the season. I am personally hoping she brings us as much entertainment as Tierra from Sean Lowe’s season. However, Ben mentioned how gorgeous she was several times so we might be seeing a lot more of her crazy for episodes to come.

12 & 13) Emily & Haley, 22: I don’t think they are competing as a package deal but their occupation is “twins” so they deserve to be lumped together. They are obviously both gorgeous and I can’t hate on them too much because they were rocking my favorite jewelry designer, Kendra Scott, throughout the episode.

14) Jubilee, 24: Her plunging neckline dress and horrible pickup line about her tight dress made it pretty obvious the reason she came on the show.

15) Amber, 30: Basically Amber is Becca’s wing woman. Sorry Amber, no one really remembers you from Chris Soule’s season. And to top it off, Amber’s frumpy dress was definitely the worst of the night.

16) LB, 23: LB reminded me of someone who just walked off an episode of The Hill (maybe it’s her name too).