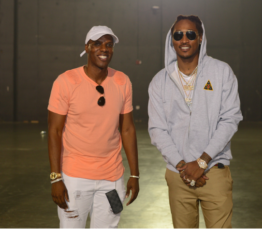 Drake and Future handled their business on the Summer Sixteen Tour. I was able to catch both of the Atlanta shows as well as the Nashville stop. Here’s footage from the tour:

Thanks to an inside connect, I had a chance to catch up with Future after the show. He’s killing the game right now on the stage with the hits and is a leader in the fashion / jewelry game as well. We chopped it up, talked about what’s next and of course, snapped a pic for the Gram.