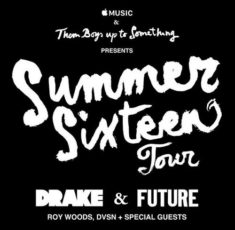 With Drake’s “Views” album release slated for Friday, he announced a summer tour with Future earlier in the month. The initial pre-sale tickets sold so quickly, the duo immediately posted additional dates. The last time these two paired up on the road was for Drake’s “Would You Like A Tour” in 2013. Please believe I’ll be in attendance when the tour hits Atlanta.

Additional shows have been added to the Summer Sixteen Tour with Drake and Future. Pre sales begin at 10am local time today.