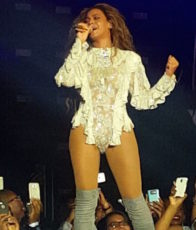 Beyonce´ Knowles-Carter had herself quite a week with her latest album, Lemonade, debuting at No. 1 on the charts while her nationwide “Formation” Tour got underway as well. PSBPopCulture.com Team Member, Taylor Johnson, joined me for the Atlanta stop. Held inside the Georgia Dome, 50,000 fans were on hand for the two-hour long performance. Here’s a look back at the night:

Posted May 4, 2016 by admin in category "#EntertainmentPSB