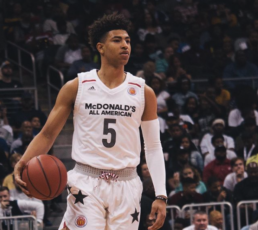 ATLANTA – The McDonald’s All-American Game is annually the most prestigious postseason game that a high school basketball player can take part in. Held at Philips Arena this year, our staff was on hand court side to document the event both through pictures and social media.

Both games were down to the wire. One of the city’s dopest young photographers, Larry Rhinehart of Parallels Media came through with incredible footage for us to use afterwards on social media. Take a look at some of our posts:

Before Christyn Williams was the 2018 McDonald’s All-American Game MVP 🏆🍟🍔, she shined for the Arkansas Banshees at our events.

RJ Barrett showed Duke fans exactly what they have to look forward to in 2018-19 finishing with 26 points on the night.

Quavo was paying close attention to the action as well.