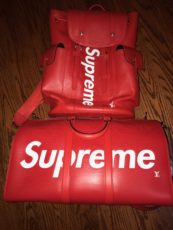 Supreme and Louis Vuitton announced the launch of a collab back in January. In the meantime, the streets anticipation of the drop led to the release of arguably the hardest collection to get in recent memory. Resell prices reached as much as 10 times the retail list price based largely in part to who was wearing it on social media: 2 Chainz, DJ Khaled, Justin Bieber and Odell Beckham Jr., amongst others.

Here’s a look at how people who got their hands on this are rocking it:

My 24 hours in Miami was a breathe of fresh air. I saw a kid wearing a shirt while I was there that made me think. It said: "sell drugs / rap / go to (the) NBA." J. Cole said that on his latest album. My issue is we hear about only being able to succeed in those areas from people who have made it off of rap. To me, those are the Old Rules. My goal in life is to be a living example of the New Rules that with consistent hard work that you can help others, win at life without doing one of those three things and still chase then catch all of your dreams. I do this for the kid coming behind me who has the mentality to be a Fortune 500 mastermind, the world's premier hand surgeon or perhaps a college professor. Don't let people box you in as to what you should or should not aim to become no matter your economic background, gender or race. If I can Level Up, anyone can. Strive for what you believe in, set goals and you can achieve em. {shot by @ktaylorjohnson35, assist to @palmtreejd of @parallels} —————————————— •🎩: @chancetherapper •👕 & 👖: @supreme @louisvuitton ___________________________________________

Helllo may I speak to #drenchGOD with the wheelchair swag!!!! Still killing the game with this recipe jack !! Anaheim thank you for another sold out show #logohoe #prettygirlsliketrapmusic

I have to say, this was one of the best awards I've received. To all the kids out there thank u for voting and supporting, lil do u kno ur support means the world to me. It's the reason I strive to be who I am, to make a difference, to be an inspiration to someone, even if it's one person. So personally I wanna thank each and every one of the kids out there who look up to me, u give me a reason to make it thru the days , good or bad, I'll never stop workin for u guys. #MuchLuv