Nike released the Jordan 11 Retro Backpack at the tail end of 2014 to coincide with the re-release of the Jordan 11 sneaker. The Backpack has the sneaker attached to the bottom. It’s a pretty unique design. They released two color ways: Black / Red “Bred” for Jordan’s Chicago Bulls theme and the Carolina Blue / White in Jordan’s UNC alma mater.

The Backpack wasn’t mass delivered to retail shelves and most casual fans missed the release with Nike.com selling out of the product in a hurry (surprise, surprise). I wore the Carolina Blue / White color way last week to an event and was asked several times where to get them.

The best answer I have right now is to search secondary sites like eBay or Amazon. Upon quick glance, both have limited quantities selling between $229 and $300. The bag originally retailed right at $199 so the markup isn’t astronomical given how quickly the bag disappeared from traditional retail outlets. Add it to the holiday Wish List.

UPDATE 12/25/15: After inquiring about the backpack at the Elite Basketball Academy Top 40 Camp, Hannah Fuller then received it as a Christmas present. Here she is on Christmas morning: 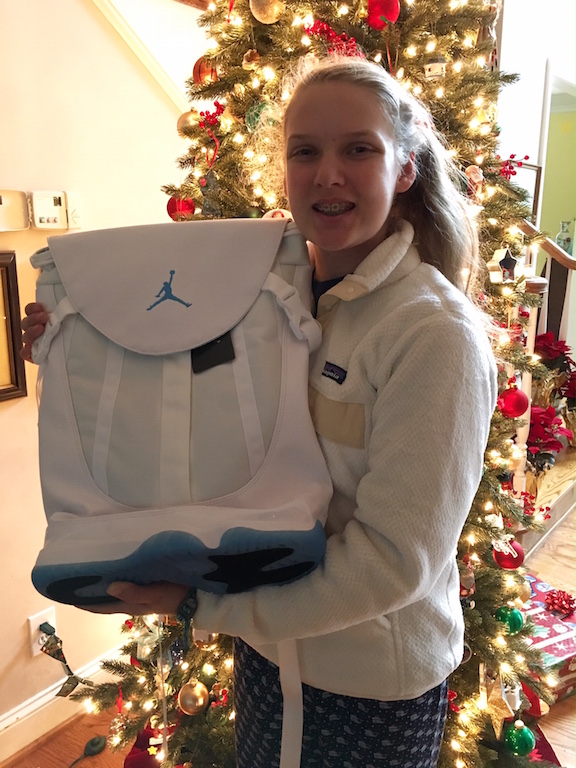 Brandon Clay is a contributor to PSBPopCulture.com through his various genre reviews. A self-professed entertainment & music junkie, Clay has been on his game since picking up his first Nintendo and Sony Walkman in the early 90’s. You can follow him on Twitter @bballplusmusic.