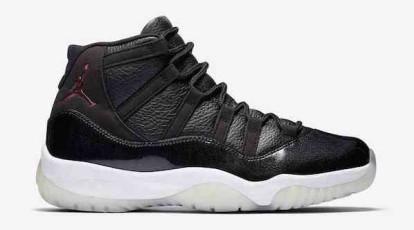 The Retro Jordan 11‘s are arguably the most popular shoe in the Jordan Collection. I can say with certainty that they are for me. The combination of the patent leather and crisp lines on the shoe make it a must purchase anytime a new color way is released. On December 12th, Jordan Brand dropped the “72-10” version. The shoe is in Chicago Bulls colors to celebrate the 20th anniversary of the Michael Jordan-led team that won 72 games en route to the 1996 NBA World Championship.

The shoes were (and still are) relatively cost friendly with a retail price of $220. While the shoe isn’t available on any retail sites that I could find after the end of first day release, multiple secondary resellers have them for under $320. These make an ideal Christmas gift for the sneakerhead in your household.

The 72 10s so clean you don't even wanna wear them! "Should have copped 2 pair" PEEP: https://t.co/KwcxuO98O1 pic.twitter.com/yPcOdZMmKT

#BrandonClayGiveaway | READ CAREFULLY 🎅🏾🎄 FOUR (4) RULES TO WIN : 1) You have to follow this account. 2) You have to like this picture. 3) Comment your shoe size (men's) under the picture. 4) You MUST tag a friend. DEADLINE: DECEMBER 30 at 11:59 PM EST SELECTION PROCESS: Will be randomly selected out of a Jordan Hat on New Year's Eve. Video will be posted on my IG page. I'll DM the winner to setup the delivery. #AnyGymIsHome

Brandon Clay is a contributor to PSBPopCulture.com through his various genre reviews. A self-professed entertainment & music junkie, Clay has been on his game since picking up his first Nintendo and Sony Walkman in the early 90’s. You can follow him on Twitter @PSBPopCulture.