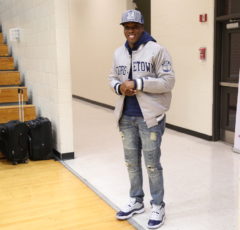 “Brandon’s Closet” is designed to give our readers an in-depth look at the styles directly from my closet and where to pick them up.

Between legendary Georgetown guard Allen Iverson and the fictional character, Kyle Watson, in Above The Rim, the Hoyas color way was all the rage in the mid-90’s. In 2015, the Jordan Collection released a mean Hoya-inspired Retro 11 Low. I took that Navy / Grey theme and found a vintage Villa Exclusive Starter jacket to complete the look. With a little help from a Jordan 4 Navy set in my closet, I had the look I wanted.

Toss in the irony of a Young Iverson double crossing Michael Jordan during AI’s rookie campaign in Philly and an Instagram caption (see below) that caught Shane Laflin‘s attention was born.

Here’s Where To Find The Clothing Pieces:

For all the greats, there's a moment when your idols become your rivals. You make friends with Michael Jordan but gotta hit him with an Allen Iverson crossover for your survival. {shot by @larrywrhinehart} #AnyGymIsHome