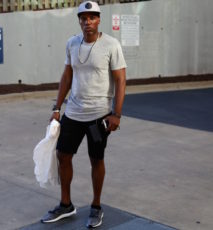 Last month, adidas released a new version of their popular Ultra Boost shoe line called the Ultra Boost Uncaged. Here’s our take on whether adidas scored a hit or not:

Brandon: Between the Yeezy’s and the Boost Uncaged, adidas has quietly put together a very nice 12-month run. I have multiple pair of the new release including the my favorite, the triple red (see below). The white and black are both great everyday shoes and can be found on retail shelves still.

Alli: I already know I will be spending my next Peach State check on a pair for myself. They shoes have a clean look with multiple colors that I like. After seeing Brandon with his on, they are really a must have for my closet.

Alli Lhamon represents the next wave of PSBPopCulture.com. A fashion and music junkie, Lhamon has been on her game since Day One in 2000. She’s a genius in the classroom and might finish with more degrees than the rest of the team combined. You can follow her on Twitter @allilhamonn.