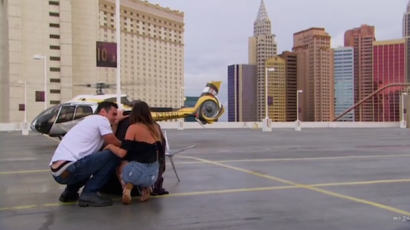 Caila starts off the episode saying what America is thinking “Jubilee is a tough girl, no one can tell the difference between Haley and Emily, and Olivia is driving everyone nuts.” The show’s host, Chris Harrison, interrupts her girl bashing and comes to the mansion to tell the girls that they are going to Vegas: where everyone finds either love or strippers. Semantics.

JoJo gets the first date card that says Ben is going to set her heart on fire. Immediately the camera shoots to Olivia who looks like she is trying to set JoJo on fire with her special love super powers. Instead Olivia settles for moving a table with her mind to almost knock JoJo off a building. JoJo opened up to Ben about her last relationship and how “they” betrayed her. She continues to use the pronoun “they” DJ Khaled style to refer to her past relationship in a very aloof way. Hey JoJo never trust “they”. Major key. If you haven’t seen Khaled’s Snapchat, please take five minutes and get a couple of laughs in. Thank me later.

Sidenote: JoJo was sporting a bracelet very similar to the $6,000 Cartier version that Kylie Jenner wears. Still not sure if it was a knockoff or not, but if it isn’t “they” wasn’t treating you so poorly JoJo.

Ben takes the girls on a group date with some creepy puppet guy. In possibly the greatest group date in The Bachelor history, the girls perform in a talent (I use the word talent loosely) show on stage for 1000 people.

Here’s my takeaway from each performance:

Lauren H.: She is immediately concerned about wearing nipple tassels. Because nipple tassels and Vegas are basically synonyms. She goes the extreme opposite of that and decides a chicken suit is the best way to display her talentless self. With that being said, the Kindergarten teacher’s inappropriate comments are making her really grow on me. All I’m saying is that there was a reference using the term “Little Ben”

Lauren B.: She describes herself as having ZERO talent. We were all thinking it. However she is apparently talented enough to earn a group date rose from Ben.

Jubilee: She plays the cello because what else would you expect from a girl with a chest tattoo?

Olivia: Dressing up as a showgirl and jumping out of a cake is a little cliché for Vegas don’t you think Olivia? I think the cake was just so she could hide her ankles as much as possible. Ben’s secret language told Olivia he was embarrassed of her (didn’t take a secret language to guess that) and Olivia has a self diagnosed panic attack. 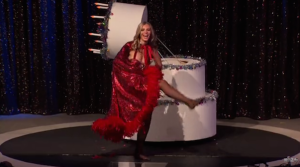 Amanda: Amanda is so unimpressed with Olivia she can’t even laugh at her while she’s on stage. She criticizes her performance by saying she had so much time and “all she came up with was a terrible showgirl dance?” Amanda girl, you just attempted hula hooping on stage and failed.

Rachel: I’m starting to wonder how Rachel is unemployed. She rides a hover board flawlessly and can make balloon animals. Someone get her a job at an amusement park.

Caila: Ben describes Caila as a “sex panther” so she’s doing something right.

Amber: She continuously gets no camera time unless she is making fun of Olivia and I’m not mad about that at all.

I think Leah dressed up like a clown, and Jennifer was so talentless she didn’t even get any camera time on stage. She’s going to be just fine because her talent is clearly being gorgeous.

Becca gets the second one-on-one date and Ben sends her a kind of unintentionally horrible wedding dress to wear to the date at the Little White Chapel. The two marry people in the chapel together. I thought people only got married at 2:00 am in Vegas after one too many, but I guess I learn something new everyday. Becca disses Chris Soules by saying that the risk outweighs the reward a lot more this time. Sorry Chris. I’m personally a fan of Ben and Becca together, it just makes for boring TV.

THE TWINS GO ON A TWO ON ONE.

Ben takes the twins to their home in Vegas. They sneak into each twin’s bedroom while the other and their mom is in the living room, high school style. Haley still has pictures of her ex-boyfriend framed in her room and Emily basically sabotages her sister by telling Ben she doesn’t think Haley is ready for a relationship. Emily’s sabotage works and Ben sends Haley home, actually she is already home so Ben ditches her for the limo with the other one to make out with Emily. Meanwhile Haley is inside yelling at her mom for wearing those terrible Mek jeans on national TV (if not she should have). My main concern: who gets to bring all of the Kendra Scott jewelry while the other one is away?!

Rachel, like America, knew she was going home tonight and that’s why she wore her floor length red gown because outside of the Bachelor, where are you going to wear that dress? Also not surprisingly, Amber went home. I’ll miss her Olivia hating comments but not her fashion choices.