Ben takes the girls to Mexico where they have a gorgeous suite to sit around and talk about each other. But Olivia wants everyone to calm down as a bidet isn’t that impressive because she has one at her house. Surprise, surprise. Ben decides to wake the girls up at 4:20 am (how original of you Bachelor producers) to see if he can find a girl who wakes up as stunning as Britt from Chris Soules season. Ben spots a girl’s weave and yells out “whose weave is this?” in my favorite Ben quote of the season so far. Ben finds his Britt, it’s Amanda looking stunning at 4:30 am minus the glitter eye shadow. On the opposite end of the spectrum Lauren H. took the cake wearing a metal retainer. But you have to love a girl who can laugh at herself.

Amanda gets the first one-on-one date. Amanda is Emily Maynard’s brunette twin, how can you hate her?! Looking at you, Olivia. Ben takes Amanda hot air balloon ride because that’s so Mexico. Amanda opened up to Ben about her ex-husband who sounded like as douchey as Juan Pablo. Ben continues to be a complete gentleman, as he has the entire season, and takes the story of Amanda’s past in the best way possible. Amanda is so sweet but I don’t know if her and Ben have much of a connection. Maybe a Bachelorette front-runner for next season?

Group date: Ben takes the women to a Spanish class, following up with a Spanish cooking glass. Olivia and Jubilee literally fight over Ben and I have a feeling that that weave Ben saw on the dresser is about to reappear after the fight.

Becca: She is real life hairstyle goals. Her and Caila didn’t get much TV time this episode, but that’s because there was so much drama the normal girls didn’t have a chance this week.

The twin: Claims to be out her element in all things Spanish, mainly because she is missing the other half of her brain. Apparently, it takes two twins to learn one line of Spanish and cook a meal for Ben.

JoJo: I want her entire wardrobe. It’s starting to make me think that Cartier bracelet was the real deal.

Jennifer: I am so confused as to why Jennifer never gets any airtime. She must be incredibly normal, but if that’s the case I don’t know how she even got on the show.

Lauren B: It’s difficult to pull off all white, but take lessons ladies Lauren B. shows us how it’s done. That dress is flawless. Ben clearly agrees because he couldn’t keep his hands off of her when he pulled her aside during the group date. Their chemistry is undeniable, and I’m definitely thinking she makes it to the final two.

Leah: I have no idea how she is still on this show.

Jubilee: She was consistently pouting like the three year olds I work with, someone needs to move her green card to yellow. Everyone always talks about Olivia’s facial expressions but Jubilee’s sassy eye rolls are amazing. After refusing to hold Ben’s hand or tell him that she loves him in Spanish class, it was time for her to pack her bags and head home early. Looks like Olivia won this war Jubilee. 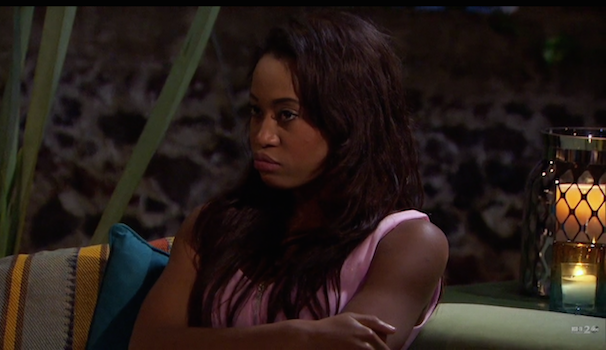 Olivia: Her facial expressions are getting out of hand; tone down the crazy eyes Olivia. The girls have had enough of her at this point. However, she continues to beat the girls to Ben first on every group date, maybe it’s her weird toes making her so fast. We now have the “Olivia Bashing List” that consists of: cankles, weird toes, and bad breath. Maybe her breath just smelled because of the “dog dish” she prepared in the cooking competition. Despite subpar cooking skills and the Olivia Bashing List getting longer, she somehow manages to get the group date rose (cue to the tears of several other girls).

It's kind of unfortunate that Olivia has bad breath considering her constant facial expression: #TheBachelor pic.twitter.com/ImXVqwypNj

The chef from the group date leaves us with this quote: “When you’re ready to cook, you’re ready to get married.” Jubilee was the only good cook, and he sent her home so let’s hope that isn’t true.

Lauren H. got the second one-on-one date. Ben tells us that “one thing people don’t know about Mexico City is that it is known for fashion” well if no one knows that, is it really known for fashion, Ben? The duo goes to Mexican fashion week, which is so well known that they let two people with no modeling experience walk in the show. Lauren H. is so dorky it’s adorable, while Ben’s taking it so seriously he looks like Derek Zoolander. Regardless the two are “really, really ridiculously good looking.”

This episode left us with a cliffhanger during the cocktail party after a Teen Mom comment was made by Olivia to Amanda. To which Amanda responds with “Well you remind me of Snookie from Jersey Shore who doesn’t have her life together, but you don’t hear me saying that to your face.” Amanda for the win. This little feud sends the twin over the edge and she cries uncontrollably to Ben about her hate for Olivia and the other girls follow her lead.

Until next week we won’t know who goes home with Jubilee but my money is on Leah. Mainly because her rose ceremony dress looks like a reused bridesmaid dress and it’s awful. That and she gets zero camera time.