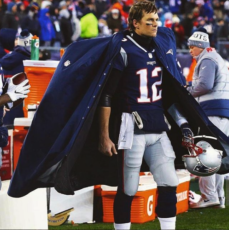 It’s safe to say that NFL megastar Tom Brady has established himself as arguably the game’s greatest quarterback. There’s room to argue about his career against a legend like Joe Montana.

As far as current NFL quarterbacks go, Brady is in a company all by himself. He’s 40 years old and still performing at a level good enough to be named the league’s Most Valuable Player on an annual basis. Despite a loss in this year’s Super Bowl, Brady finished with 505 yards passing in the game breaking the all-time Super Bowl record. He’s best known for his day-to-day training routine and meticulous nature preparing for opponents.

Take a look at the trailer for his upcoming documentary, Tom Vs. Time:

All that is left to do is execute. Episode 5 now on Facebook Watch. Link in bio. Tom vs Time