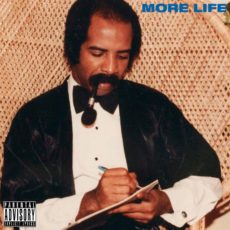 Drake released four new songs in honor of his birthday last weekend. He’s slated to release a project in December titled, “More Life.” Though it isn’t going to be an album, this early marketing campaign let’s me know it will be sold via the iTunes Store and streamed on Apple Music like one.

In “Two Birds, One Stone,” Drake took three minutes to address some of the recent shots from Kid Cudi and Pusha T. Here are my favorite lines from the song:

“I put it all in the music cause if I don’t say it here then I won’t say nothin. Can feel my hand gettin’ tired from all of the grudges.”

“Two Birds, One Stone my aim is amazin’. I need to start losing my ish on your people that’s hatin’.”

“Free C5, how the heck we got the boss waiting.” — reference to Lil’ Wayne’s ongoing dispute with Birdman about money he’s owed. The dispute is holding up the release of The Carter V.

“Stay in school. 2 percent of us rich and the rest they all milk it.”

“I never said it if I didn’t live it. Still they try to tell you I’m not the realist. Like I’m some privileged kid that never sat through a prison visit or like it was just handed to me tied with a ribbon. I never worked to get it.”

“But really it’s you with all the drug dealer stories that’s gotta stop though. You made a couple chops and now you think you Chapo.” — Down to his rap name, King Push there’s a 15-year story on Pusha T selling drugs in his past life

“You middle man in this ish, you never went live. You’ll be trying to sell that story for the rest of your lives.”

“I loved your old stuff, wasn’t a fan of your latest. My numbers out of this world no wonder I feel so alienated. You were the man on the moon now you just go through your phases life of the angry and famous.” — Cudi’s debut album was titled “Man on the Moon”

“You stay Xanned and Perced up so when reality sets in, you don’t gotta face it.” — Cudi checked himself into rehab days after talking about Drake

“Look what happens soon as you talk to me crazy. Is you crazy???” — (see above) ouch Drake