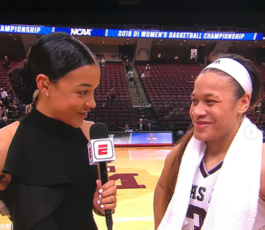 I was fortunate to train Andraya Carter twice a week in a small gym with no air conditioning starting 13 years ago. Right away, there was a unique ability from a talented sixth-grader to lock in despite the warm conditions. Since then, Carter has always shown the skill to be three things at whatever she sets her mind to at the time: articulate, focused and passionate. After finishing her playing career at the University of Tennessee in 2016, Carter is now using all three of those traits to pursue a career in sports broadcasting. In just her second season, she has been selected to call the NCAA Regional Rounds this weekend in College Station, Texas for ESPN.

“We don’t act like rookies- must be something about our last name” 🙌🏽🙌🏽 Loved interviewing @chennedycarter15 after the freshman SHOWED OUT yet again- 26 points, 11 assists, 6 steals, 5 rebounds… #TEAMCARTER

Women’s basketball is receiving more television time than ever. In addition, the premier analysts are also getting game assignments on the men’s side as well. Debbie Antonelli, Doris Burke and Kara Lawson are all calling NCAA Division One Men’s or NBA games on a consistent basis during the 2017-18 season. Burke (ESPN) and Lawson (Washington Wizards) are almost exclusively working with the NBA making a full-time living off of broadcasting the game they played at a high level themselves. With her wealth of knowledge and ability to talk about the nuances of the game on the fly, don’t be surprised to see Carter’s name amongst the best in the game sooner than later. Away from the microphone, she is locked in as an elite skill development trainer as well working with both the CoachHemi.com and Elite Basketball Academy showcase series.

Rocked my Nana’s favorite color on my first TV game as an analyst today. I know she’d be so proud 💜 Thank you @secnetwork for the opportunity and THANK YOU @sportney_lyle for being so incredible to work with on such a big day (and for being a great photographer lol). #AlllllTheSmiles

“You’re gonna stumble over your words sometimes, Draya. Forget that stuff. The only time you should ever be upset with yourself is if you know you didn’t prepare.” – @lives2inspire 🙌🏽