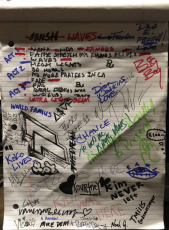 Kanye West aka The “Louis Vuitton Don” is back in the news with less than two weeks to go until his highly anticipated new album drops. This time, the news isn’t a new song dropping. It’s actually him dropping his album title.

What initially was going to be title So Help Me God then changed to Swish (which I never liked as a title by the way) now is titled Waves. A day after unveiling the track list to the then 10-song LP, Yeezy announced the album will now be titled Waves. Oh, and apparently with the new title came the addition of a new song. Mr. West added “Ultra Light Beam” to make Waves an 11 track opus.

Waves will debut at New York City’s Madison Square Garden during the Yeezy Season 3 fashion show which will be broadcasted live to various theatres across the world.

Can February 11th get here already???

Donte’ Grant is a contributor to PSBPopCulture.com. Grant, a 10-year music industry veteran, a former A&R at Atlantic Records, Jeezy’s CTE label, and founder of TheOrganizedGrind. Follow him on IG @MuchoDineros and Twitter @dinerojones.